Just because she can see the dead doesn’t mean Verity Long wants to spend her days hunting ghosts. Instead, she’s over the moon to land a marketing job at the local bank…until she finds her new boss dead in the vault. Even her ghost friend, Frankie, knows that's no way to start a career.

Relieved to let the police take charge, Verity steps aside, bound and determined to keep her ghost sightings to herself. But when she learns the main suspect in the murder is a very crooked, very dead mobster, Verity knows it's up to her to solve the case.


She teams up with her ghostly gangster buddy Frankie, as well as the irresistible and charming Ellis, as the three of them search haunted mob hideouts, hidden passageways, and historic cemeteries for the facts behind the heist of the century—and a modern-day motive for murder.


Too bad uncovering the truth could very well make Verity the next victim... 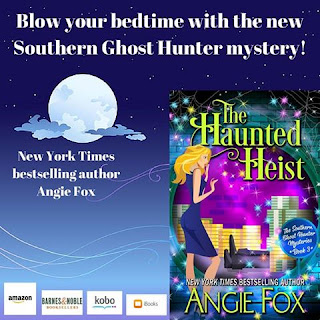 This book was awesome! I am so in love with this series, I hope there is more to come.


I personally don't think there was as much suspense in this as the last book but it was there of course. This book had lots of action!
My favorite character is still Frankie! Love his humor, even when he isn't trying.


If you read any other books in this series, you need to read this one.  I was hooked from the beginning!


* I received my copy from Netgalley for review